Rome:  A Catholic’s Guide to Rome, the “Eternal City”

What can we say about Rome that has not been said a thousand times before? No where else can you find so many reminders of the history of the Catholic Church and so many beautiful churches and monuments.

And much of Rome is easy to walk. Many of these locations are within 10-20 blocks of one another, so if you pace yourself (perhaps stop for a cup of cappuccino…or a gelato….along the way) you can easily visit many of these places on foot. Of course if you are with an organized tour they will probably provide your own private transportation. Check in advance to find out–especially if you have mobility problems–but don’t let that keep you away.

A word of warning about local tour guides in Rome. Some guides are excellent and some are very poor. In addition, some can be quite anti-Catholic. Comments such as “these items were stolen from…..and brought to Rome” or the use of the word “legend” rather than “tradition” will give the traveler a biased and in-accurate experience.

And, be aware, that Italy has strict licensing laws concerning guides. A guide might be licensed for Assisi, but not Rome, or vice-versa. If you use an unlicensed guide and he gets stopped by the authorities, your tour might come to an abrupt halt!

Click here to read our suggestions about private tour guides in Rome.

Whether traveling on your own or with a group, we recommend you have a map to orient yourself to the city. Even if you are with a tour group, it is nice to know the layout of the city.

For example, you might find that the hotel you are staying in is just a few blocks from Saint Peter’s Square and you can get out and explore on your own after dinner.  The “City Wise” maps are great–waterproof and easy to fold and read.

For help finding your way around, we suggest the “Little Black Book of Rome”  It is organized by location rather than alphabetically like so many guide books, so it can help you plan your daily itinerary.

And, of course, Rome can be a starting point for many other cities in Italy.  And we recommend traveling by train:  Italian trains are fast, clean and take you right to the heart of town.  Get train & bus schedules, see fares & buy tickets here

Check out the many day trips from Rome:  Florence, Tuscany, Naples & more.

Or perhaps a Pasta-Making Class: Cook, Dine & Drink Wine With A Local Chef 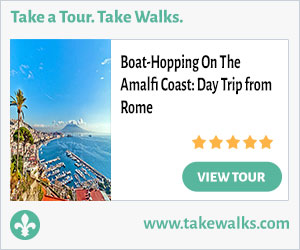 Click here for “Vatican Cookbook Set” by The Pontifical Swiss Guard..buy it for yourself or order the gift set for someone else.

Below are some of the most notable Churches in Rome

♦  Indicates one of the Seven Station Pilgrimage Churches of Rome.  This is a tradition begun by Saint Philip Neri in the 16th Century & continuing on today.

There are four major Basilicas:

♦  Basilica of St. John Lateran :  The Pope’s own church

♦  Basilica of Saint Mary Major: magnificent artwork and home to the statue of Salus Populi Romani

♦  Basilica of St. Paul Outside the Walls:  tomb of Paul the Apostle, Pope John XIII and others

Some other interesting churches:

Basilica di Sant’Andrea delle Fratte: Conversion of Alphonse Ratisbonne, founder of the Congregation of Our Lady of Sion

Basilica of Saint Bartholomew:  contains 6 chapels dedicated to the martyrs of the 20th century

Basilica of San Chrisogono  one of the original parish churches of Rome, tomb of Blessed Anna Maria Taigi

♦  Basilica of the Holy Cross in Jerusalem  Many holy relics

Basilica of Saint Mary in Cosmedin: Skull of St. Valentine and “Mouth of Truth”

Our Lady of the Conception Capuchin Church: the church of the bones

Church of the Gesu: The Jesuit Church and home of St. Ignatius of Loyola.

Church of Saint Alphonsus Ligouri:   Original image of Our Lady of Perpetual Help

Church of Saint Cecilia in Trastevere

Church of Santa Maria in Ara Coeli :  statue of the Bambino Jesu)

Churches of the Roman Forum : some of the oldest churches in Rome

Domine Quo Vadis, or The Church of “Lord, Where are You Going?”.

Saint Peter in Chains:  Displaying the chains that held Saint Peter when he was in prison

Sanctuary of the Holy Stairs :  the steps Jesus climbed to be condemned in Jerusalem

♦  Sanctuary of Our Lady of Divine Love:  Famous Marian Sanctuary and statue

National churches today resulted from an  ancient tradition where pilgrims gathered in certain churches in Rome to hear Mass in their own language, meet others from their home countries, and often receive help with finding food and lodging.

Today most countries have a national church in Rome and, as in the past, pilgrims still have an opportunity to hear Mass in their native language.

Regardless of your nationality, you should try to include some of them in your visit to Rome.  Most have certain works of art, perhaps tombs of certain Popes or Saints, or other features that make them worthy of a visit despite your country of origin.

Canada:  Our Lady of the Blessed Sacrament and the Canadian Martyrs

France:  Church of Saint Louis of the French:  magnificent Baroque church with paintings by Carvaggio

Netherlands:  Church of Michael and Magnus  Two major relics: stone where Jesus was presented at the Temple in Jerusalem, which is used as the main altar of the church and the stone where Abraham bound Isaac.

And other places to visit:

Castel Sant’ Angleo:  Where an angel appeared to a Pope and stopped the ravages of the Plague

The Lateran Apostolic Palace:  Former Palace of the Pope

Piazza Navona:  one of the most interesting Piazzas in Rome & Church of St. Agnes in Agony

The Museum of the Holy Souls in Purgatory

Tre Fontane: apparitions of Our Lady of Revelation

Vatican Museums (including the Sistine Chapel)

And, a word about Gelato:
Gelato: an Italian treat not to be missed

As a major city, Rome is served by two airports:  Leonardo da Vinci (the main airport, used by most major airlines)and Ciampino Airport which is used by budget airlines Easyjet and Ryanair.

Train connections are excellent….the main terminal is aptly called “Termini”.  And, of course, Rome can be a starting point for many other cities in Italy.  And we recommend traveling by train:  Italian trains are fast, clean and take you right to the heart of town.  Get train & bus schedules, see fares & buy tickets here.