The Cristero War in Mexico: “For Greater Glory”

Many people–including many millions of Mexicans–are unaware of this sad chapter in the history of Mexico. It was a time of upheaval in the world–the Russian revolution being the hallmark. The rise of Communism encouraged authoritarian regimes to restrict religious freedom. Already ingrained in the Mexican constitution of 1917, this was not vigorously enforced until the 1920’s, when the dictator Calles decided to outlaw public worship, priests were not allowed to wear their clerics in public and later, priests and religious were expelled or just executed outright. This, in a country that was 90% Catholic. A period of peaceful resistance ensued but finally in 1927 open rebellion broke out. This uprising, also known as the Cristiada, had as its battle cry “Viva Cristo Rey” or long live Christ the King. One of the hallmarks of this uprising was the efforts of women and children to supply the rebels with food and arms. At first given little weight by the government, the rebels grew into a formidable force and after much bloodshed on both sides a peace agreement was reached partly through the efforts of the U.S. and the Knights of Columbus, who did much to publicize the atrocities in the U.S.

Little mention was made of this in the history books (including those in Mexico) and the story is just now receiving the attention it deserves. In addition to the books shown here, the movie (released in the U.S. June 2012) “For Greater Glory” has done much to bring the story to light. It opened to great reviews in Mexico as well as the U.S. The movie was financed in part by the Knights of Columbus. 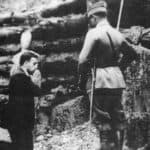 We have a page on our site about one of those martyrs: Blessed Miguel Pro. You can visit his shrine in Mexico City. It is one of our favorite sites in Mexico City and a reminder of the high price that people paid for religious freedom.  Shown here is a picture taken just before his execution by firing squad. In this day when the Catholic faith comes under increasing attack from hostile government forces it is a reminder that religious freedom is not always free.

Another heroic figure of this war is Saint Jose Sanchez del Rio, a young boy who was tortured and still refused to renounce his faith.  He was proclaimed a Saint in 2015, and we celebrate his Feast Day on February 10.

On May 21, 2000, Pope John Paul II canonized a group of 25 saints and martyrs who had died in the Mexican Cristero War.  In 2005 another group of martyrs were recognized by Pope Benedict XVI and then in October 2016 Jose Sanchez del Rio was proclaimed a saint.

2 thoughts on “The Cristero War in Mexico: “For Greater Glory””