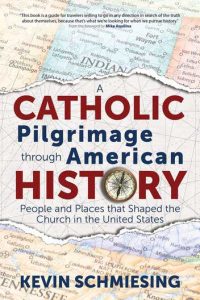 Most history books dwell on the Protestant history of the U.S. from the Pilgrims arriving at Plymouth Rock to the founding fathers, almost all of whom were Protestant.  But there is a rich Catholic history as well, and when you finished this “pilgrimage” you will see how much there is that you may not have known.

We found it to be an interesting and well-written addition to our library…better written than this review, perhaps.  As previously stated, it is a history book….not necessarily a guide book in the traditional sense….but the wealth of information contained in the 288 pages of this book will help you appreciate the significance of of the sites that you visit…whether in person or as an armchair traveler. For example, to visit Saint Patrick’s Cathedral in New York City is an awesome experience, but it becomes even more meaningful when you read the fascinating history contained in Kevin Schmiesing’s book.

The author has been meticulous  in his research, citing hundreds of sources for the book.

Well written and packed with information, we could not find much to room for improvement.  We were rather surprised that the author paid so little attention to Texas (other than two places mentioned):  after all, what many consider the oldest Cathedral in the U.S. is San Fernando Cathedral in San Antonio, completed in 1731  (Cathedral Basilica of St. Augustine in Saint Augustine, Florida claims to be the first, but was not was completed until 1793). And there are 4 Spanish Missions still in San Antonio (all are active Parishes) as well as two national shrines that would have made a useful addition to the book.  You can find out more about the Catholic sites in San Antonio on our web page here.

Other than that small criticism…and we realize that the author could not possibly cover every Catholic site…we find the book to be enjoyable and informative, packed with interesting information about the rich Catholic history of the United States.

Kevin Schmiesing lectures on Church history for Mount St. Mary’s Seminary and School of Theology in Cincinnati, Ohio, and serves as director of research at the Freedom and Virtue Institute. He served as a research fellow at the Acton Institute for the Study of Religion and Liberty from 1999 to 2020.

Schmiesing is co-host of the podcast Catholic History Trek on Spotify and YouTube and has contributed to Catholic World Report and Crisis magazine. He is the author of Merchants and Ministers and Within the Market Strife and editor of One and Indivisible, Catholicism and Historical Narrative, and The Spirit Matters.

He earned his bachelor’s degree from Franciscan University of Steubenville and a doctorate in United States history from the University of Pennsylvania.

Kevin Schmiesing and his wife, Anne, have seven children and live near Dayton, Ohio.