The history of Mont Saint Michel:

This medieval monastery is dedicated to St. Michael the Archangel.   According to tradition, in 709 Saint Michael the Archangel appeared to the bishop of Avranches, St. Aubert, and told him to build a chapel in his honor on the island. Saint Michael had to appear to him at least two more times before he took the vision seriously. On the third occasion, it is said that Saint Michael drove his finger into Aubert’s skull and ordered him once again to complete the task. The bishop finally obeyed, and within a short time he sent a group of monks over to live on the island. In 966 AD, a community of Benedictine monks replaced the former monks and began construction of an abbey on the island.

Soon, pilgrims from every part of Europe began traveling to Mont St. Michel to glimpse the island and its monastery. To accommodate the increasing number of pilgrims, the monks expanded the abbey. In the eleventh century, a large church was built on the summit of the rock, and later additions were made in the Gothic style.

The abbey was used as a prison during the French Revolution, and all religious practices were banned. In 1922, religious ceremonies were again authorized in the abbey church. Since 1969 a diocesan Benedictine community of monks and nuns have ensured the celebration of religious services for retreatants, pilgrims, and tourists alike. This monastery is second only to Paris as the most visited site in France. The atmosphere is so medieval and mystical it just seeps in to your bones. Every year 2-3 million pilgrims and visitors travel to the northwestern coast of France to glimpse a Wonder of the Western World. It is known for the spectacular tides, that come in rapidly and quickly cover what was sold ground.

During low tides, when the seabed is exposed, people can walk from the French mainland to the island. However the tide comes in at an amazingly fast pace, and cars parked near the shrine need to heed the notice posted for high tide, or their car will be swept away. There is a causeway that you can drive across to the island; however read the note at the bottom of this page about its closure.

Daily Mass is offered in the chapel down in the crypt area. You need to get (free) tickets, since space is limited. You can get them just an hour or so before Mass is scheduled to start. Try to attend if you can, it is an almost mystical atmosphere here in this ancient chapel.
St. Michael the Archangel, pray for us!

Be prepared for a bit of a climb once you get to Mont St. Michel, but you can pace yourself along the way so it should not be a problem for most people.

A tradition on Mont St. Michel is the omelettes, created in 1888 by Annette Poulard when the hotel La Mer Poulard (shown here) was founded on Mt. St. Michel. Her secret has been passed on to the hotel’s operators over the years. The beaten eggs are cooked over an oak fire in a long-handled copper skillet. A bit pricey, but then how often do you plan to visit here?

There are several hotels actually on Mt. St. Michel and from there you can watch as the sea suddenly cuts you off from the rest of the continent for a few hours. In the evening, after the tourists are gone, it can be a wonderful experience to wander the ancient streets. There are also less-expensive tourist hotels near there that offer a spectacular nighttime view of Mont. St. Michel: it is lit up at night and can be seen for miles.

Mont Saint Michel is one of the seven sacred sites along an imaginary line stretching from Ireland to Israel,  known as “The Sword of Saint Michael“.

If you are driving, you will need to use the car park at the designated are (see below).

There is frequent train service from Paris: the high-speed TGV makes the journey from Paris Montparnasse Station to Rennes in a little over two hours, and from there it is a short bus ride. Simply book a ticket from Paris to Rennes and include the bus ticket as well. The bus will take you right from the train station in Rennes to Mont St. Michel.

Or, if you are staying nearby, you may wish to book a tour with a local guide for a special experience.

Visiting Paris?  We suggest you book a day trip from Paris to Mont St. Michel and return.  It is a great break from the city and memorable experience. 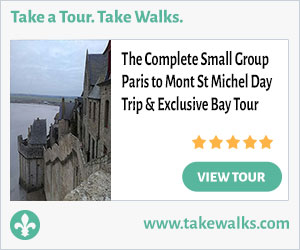 The Normandy coast is well worth a few days if you are traveling on your own. Nearby attractions include the D-Day beaches and all the history that entails plus nearby is the Marian shrine of Pontmain as well as the Bayeux Tapestry.

It is a wonderful part of France and we encourage you to spend a few days there if you have the chance. You might also wish to stay at a Chateau in the area. There are many of these stately homes that cater to tourists and give you a taste of old-world charm

Important notice: As of April 2014, the causeway is closed to private vehicles (even bicycles). This was necessitated due to the old causeway causing silt build-up in the basin the threatened the long term viability of the site. Cars are no longer parked at the base of Mont St. Michel, there is a new car park just before the causeway begins. Visitors can walk the 1 1/2 mile causeway or take trams to the Mont.

For a great video on the reconstruction work being done click here.

Find the best hotels & restaurants: both on Mt. St. Michel and in the area, compare prices, and read what other travelers have to say at TripAdvisor