It was Saint Denis and his two companions (Rusticus and Eleutherius) who brought Christianity to Paris in the Second Century. Saint Denis became the first Bishop of Paris (part of the Roman Empire at the time) and was beheaded in 272 A.D. for preaching the Gospel and attracting many converts. Tradition tells the story that after being beheaded he picked up his head and walked from the area now known as Montmartre ( hill of the martyrs) where today you find the Sacre Coeur Basilica about 6 miles to the area now known as St. Denis, preaching along the way as he traveled to his final resting place. He is the Patron Saint of France, and his Feast Day is celebrated on October 9th.

About the Basilica of Saint Denis:

Perhaps not as well known as many of the Churches in the city, this Basilica is one of the most impressive in a city full of history and we would highly suggest you include it on any visit to Paris.

The Basilica of Saint Denis is the earliest example of Gothic architecture, dating from the 12th Century. It was here that most of the Kings of France from 500 A.D. onward were buried (most were crowned at the Cathedral in Reims).

About the crypt area and King Louis IX:

The most interesting part of the Basilica is the crypt area, containing the crypts, but not the bodies, of many of the Kings of France as well as their queens (that of King Louis XVI and Marie Antoinette being especially popular). Most of the bodies were removed during the French revolution and dumped in the river.  Fortunately, the crypts themselves survived (over 70 of them), and are of rare quality with exquisite marble designs.

Of special interest is the tomb of Saint Louis IX, King of France, and the only canonized King of France. He was a great reformer of France, introducing many legal changes we take for granted today, such as presumed innocence until proven guilty.

His Feast Day is August 25.

Another very unique feature of the Basilica is a reliquary containing the heart of the boy, son of King Louis XVI, who would have become King Louis XVII. While his parents were executed at the guillotine, he was imprisoned and later died of tuberculosis. His body was buried in a common grave, but before that an autopsy was performed and the heart was surreptitiously taken from the autopsy room. It had a rather interesting history after that but eventually came back here as its permanent home in the year 2000. DNA testing was conducted using samples of Marie Antoinette’s hair and confirmed it was the heart of the boy who would have become King of France thus putting an end to any rumors that he had somehow survived his imprisonment. 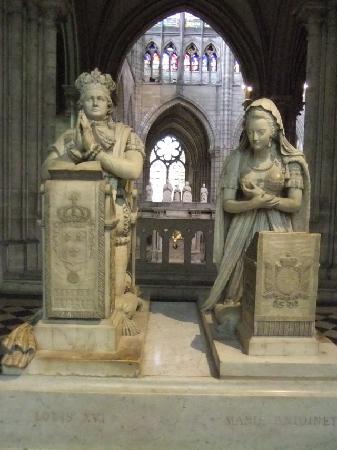 How to find the Basilica of Saint Denis:

We recommend “Little Black Book of Paris” and  “Streetwise Maps” to help you find your way.

The Basilica is located in a working-class neighborhood. It is not in the center of Paris so you would probably be best advised to take the Metro (Line 13), which has a stop near by (Saint Denis-Porte de Paris). From the Metro stop it is about a half mile walk.

Click here for the official tourism site for Saint Denis

Click here to find the best hotels in Paris, compare prices, and read what other travelers have to say at TripAdvisor