A Catholic’s Guide to Paris, France

Saint Denis introduced Christianity to Paris in the Third Century, and by the Fifth Century, the first churches were built in the city. As time went on Paris, located in the area known as Ile de France, became home to some of the most magnificent churches in Christendom. What can we say that has not already been said? Paris is Europe’s most popular destination….and for the Catholic traveler, there so many beautiful and spiritually rich experiences here that you would need to spend a few years there to see them all. But listed here are just a few.

Most of the major churches offer daily Mass while some, such as the Sacre Coeur, have perpetual adoration.  Some churches, such as Saint Germain des Pres, offer concerts on a regular basis.  Upon your first visit you might want to schedule an orientation tour to see the highlights of the city before exploring more deeply.

Basilica of the Sacred Heart (Sacre Coeur):  Perpetual Adoration for over 100 years

Basilica of Saint Denis: Tombs of many kings and queens of France in the crypt area

Chapel of the Congregation of the Sisters of Saint Thomas:  Statue of Our Lady of Good Deliverance in nearby Neuilly-sur-Seine

Church of Saint Germain-l’Auxerrois: medieval church near the Louvre..temporary location for Masses of Notre Dame Cathedral

Church of Saint Nicholas: Statue of Our Lady of Miracles on the outskirts of Paris

Notre Dame des Victoires (Our Lady of Victories):  Relics of Saints Louis and Zélie Martin..parents of St. Therese of Lisieux.

Saint Chapelle: a royal chapel,the residence of the Kings of France until the 14th century, beautiful stained glass

Saint Sulpice:  dedicated to Sulpitius the Pious…second in size only to Notre Dame

Shrine of Saint Vincent de Paul:  His tomb and skeleton covered in wax

to our bookstore that gets great reviews because it is organized geographically rather than categorically. Not necessarily just for Catholic sites, by the way.

And, of course, we always recommend the “Streetwise” maps–easy to carry & waterproof. There is also a companion Streetwise Map for the Paris subway system (Le Metro).

Paris is divided into 20 districts, known as “Arrondissements“. The twenty arrondissements that branch out in a clockwise spiral pattern from the center of the city. The number of the arrondissement matches the last two digits of the postal code. 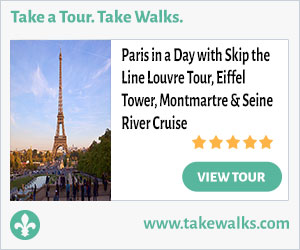 You may wish to consider a day tour of Paris including a Dinner Cruise on the River Seine, a favorite of many visitors.

As you can tell by the map, Paris originally had 4 major train stations, one for each point of the compass. In addition, there are now two more, bringing the total to six. Check out this great guide Europe by Rail: The Definitive Guide for Independent Travellers

.  And, of course Paris can be a great base for some day trips to cities such as Chartres or Lisieux.

A flashback in time to elegant dining: for a unique dining experience, consider Le Train Bleu, located in the Gare du Lyon train station. This magnificent setting will probably surprise you.

Perhaps you can imagine yourself dining as you wait to board the Orient Express traveling from Paris to Istanbul back in the early 20th Century…….is that Hercule Poirot I see over there?

Check out multi-day Tours in France

1 thought on “A Catholic’s Guide to Paris, France”