About the statue of Santo Nino de Cebu:

The statue was given as a gift by explorer Ferdinand Magellan to Rajah Humabon and his wife in 1521. They were baptized to Catholicism along with 800 subjects. Magellan was later killed in a battle on a nearby island and the remaining crew returned to Spain. After that most of the natives returned to their old pagan beliefs and made the image into a pagan idol.

Then in 1565,the Spaniards, under the command of Miguel Lopez de Legazpi, successfully colonized the Philippines and the image was re-discovered. Legazpi ordered that a shrine be built for the Santo Niño. 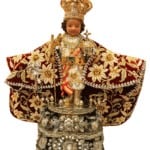 The statue is made of wood and is about twelve inches tall. It depicts the Child Jesus in the pose and dress of a Spanish monarch, with all the imperial symbols and fine dress that the monarch would wear.  Many cities throughout the country have this image under various titles.

Although the image was found on April 28, the Feast Day of Santo Nino de Cebu (known locally as The Feast of Sinulog) is held on the third Sunday of January. Great celebrations are held throughout the world honoring Santo Nino featuring dancing and feasting on delicious dishes such as Lumpia, Biko and Adobo Chicken.

The finding of the statue on April 28 is called the “KAPLAG” (Finding).

About the Minor Basilica of Santo Nino in Cebu:

The original image miraculously escaped damage during World War II when a bomb fell inside the Church and the Image was recovered unscathed. The image is permanently encased behind bulletproof glass inside its chapel within the Minor Basilica del Santo Niño.  Pilgrims are allowed to view the original image of the Holy Child, but this is closely guarded and can no longer be brought outside for the Fiesta Senor activities due to its age and fragile state.  Instead several replicas were created to use in solemn processions.

Pope Paul VI raised the shrine to the status of Minor Basilica on 2 May 1965.

⇐ Back to Catholic shrines and places of interest in Cebu, Philippines